Since I got into needle felting I made a couple surprise things for my sister, whose birthday was on Saturday 18th. She is OBSESSED with the Adventure Time cartoons and so I though I'd make her poseable Jake and Finn plushies!!

I'd made these quite a while ago, but couldn't post without spoiling the surprise. But now FINALLY I can show you all!!

So, let me introduce you to Jake!! 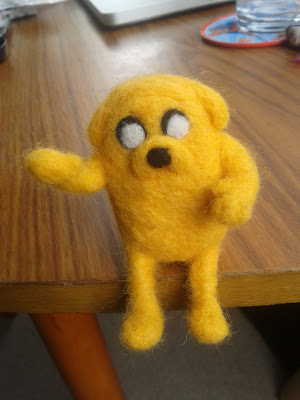 As with my other felting projects I took progress photos to be able to show you exactly how I made this lil guy! Here's how I did it. 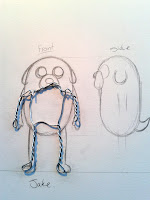 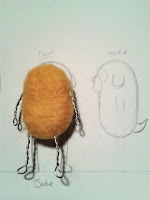 First off I drew a simple template for both Jake and Finn so as to be able to get the scale for them right.  In the cartoon Jake and Finn's limbs are like rubber and wobble all over the place so I thought it would be awesome to make my plushies poseable, so using the drawing as a template I twisted some armature wire into a rough skeleton.
Next I grabbed a ball of yellow-orange felting wool and felted it into a fat oval shape around the wire to make Jake's body. As these guys are fairly small and spindly there is no need to use a core fibre to pad them out. 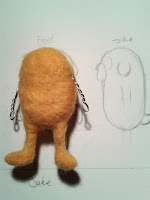 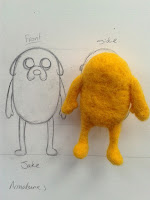 Next step is to flesh out Jake's arms and legs. I did this in very much the same was as I did for Chibi Totoro's leaf, by wrapping a thin length of felting wool around the wire armature and then poking it with the needle, working on a limb at a time and being careful not to break the needle by stabbing the wire.
Once you have the wire completely covered with felted wool you can begin to build up the shape of his feet and hands! 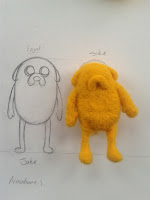 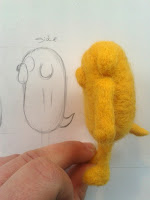 He's getting there! All that's left to do is sculpt out his droopy muzzle and ears, and felt on a little tail and his body is complete! 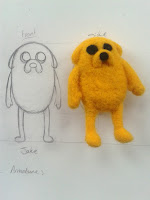 Next roll out a small ball of black wool and felt it into a very rounded upside down triangle shape for his nose, then two more small balls for his eyes. Remember to felt around the edges of the shapes to get the outline right, then felt the centre.

Finally add two smaller circles of white to his eyes to make his pupils and there you have it! A fully poseable Jake plushie! 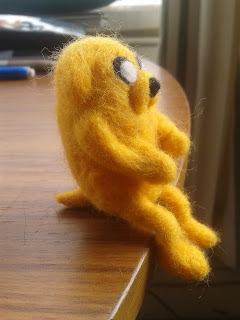 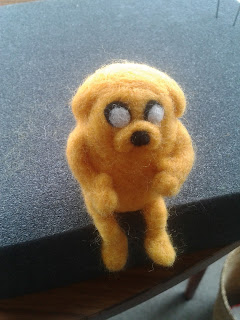 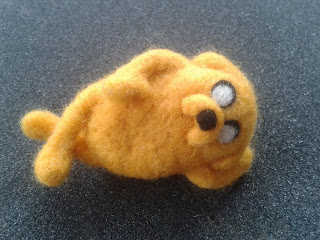 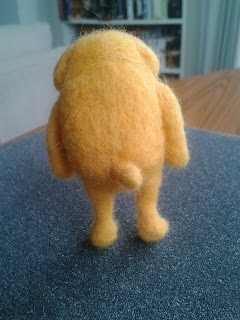 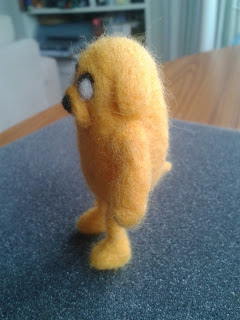 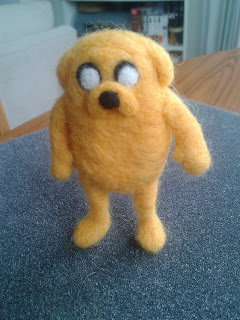 He's awesome isn't he!!? I'm really pleased with how Jake turned out, he's a relatively simple shape and was fairly easy to make! Finn however presented a bit more of a challenge...
I'll do a post on him shortly!


*Note: Plushie Jake doesn't stand without support, in the final photos there is a needle in his foot enabling him to stand on the foam base.

Sara Dunkerton
Bristol, United Kingdom
Hey! My name is Sara Dunkerton, I'm an BA (HONS) Illustration graduate working within Bristol. I have a passion for comics and animating and have a few projects involving both fields on the go, for details of said projects see the 'About Me' page below!! If you like what you see here then please don't hesitate to email me and we can chat about what I can draw for you! sara-dunkerton@hotmail.com Thanks for stopping by!

All images and animations are copyright SaraDunkerton©2017 (unless otherwise credited) and cannot be used/replicated/reproduced without the proper permission and authorisation.